What is Crohn’s Disease? 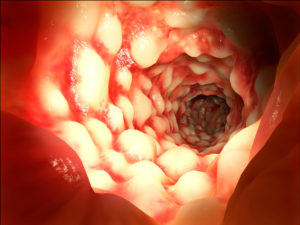 Crohn’s disease is an inflammatory bowel disease (IBD), one of a group of conditions that involves chronic inflammatory condition of the gastrointestinal tract. It’s not clear what the exact cause of Crohn’s disease is, but there may be a genetic predisposition to the condition; 5% to 20% of affected people have a direct relative, such as parents, children, or siblings, with the disease.

Crohn’s disease seems to occur when the body begins to attack harmless bacteria or food in the intestine. There are also factors that seem to trigger or worsen attacks, or increase the likelihood of developing Crohn’s. These include:

How Does Crohn’s Disease Affect the Body?

Crohn’s disease can affect any part of your digestive tract from the mouth to the rectum. It usually involves the entire thickness of the bowel wall, but it may cause inflammation and damage in particular areas while other parts of the digestive tract unaffected. However, it most commonly affects the lower part of your small intestine.

Symptoms of Crohn’s disease can be similar to those of other conditions, so it’s important to get the correct diagnosis. They include:

If you have Crohn’s disease, you may also find you have symptoms or conditions that occur in other parts of the body. These can include arthritis (most commonly), gallstones, inflammation of the eyes and mouth, kidney stones, liver disease and skin rashes or ulcers.

There are medications which can reduce the inflammation in your bowel and alleviate symptoms. You may also need nutritional supplements and rehydration fluids. Medications include:

Surgery may sometimes be necessary to repair damage to the bowel. Contact your gastroenterologist if you notice any of the signs or symptoms of Crohn’s disease.